A similar technique has already been implemented in the early versions, but due to completely changed design we come back to it in this post.

Peel rule produces and extruded shape along the normal of each segment. It means this shape starts and ends at right angle to the appropriate segment. This is find when for instance when extruding a small section in the middle of the edge, however for peel ranges at the edge boundary this may produce substrate shape with sharp angles:

For sharp-enough angles (e.g. under 60 degrees) it makes sense to merge the extruded shapes with the neighbouring edges. Epsilon areas are added at the merge boundary regions to avoid erroneous shapes resulting from numerical errors:

In fact we just take two corners at the boundaries and unite them together with the extruded shape: 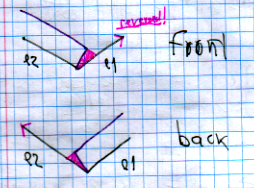 Given two geometrically consecutive edges e1 and e2 where e1.second == e2.first, we have two options for creating a boundary corner. For the front or start of the range e2 is used for extrusion and other way round for the back. The corner is simply triangle spanned by vector a – normal direction, and b – projection of a to the adjacent edge.

Projection of a to b

Let us consider the front case. Since a and e1 is known we compute b:

In the context of triangles endpoints corresponding to a an be span a line segment s = (o + a, o + b), where o is local origin: e1.second (or e2.first). s is extended in both directions by epsilon: s’. Boundary corner is now (o, s’.first, s’.second) for front and (o, s’.second, s’.first) for back cases.

An angle formed between two edges e1 and e2 determines the need for boundary corners. Dot and Cross products informing about cos and sin respectively allow us to determine the quadrant of the angle when we consider e2 as fixed and e1 resolving around it.

When indexing is negative we need to: