The selection problem is plagued by edge explosion and increasingly complex and dubious grammar results. New selection strategies are to be considered. Furthermore a layer of abstraction is to be placed between the physical and logical geometry elements:

Abandoning the physical based selection the new methods keep numeric indexing, but pointing to logical edges instead of the physical ones, as we see later.

Each rule should be capable of propagation of default input selection  to derived shapes the best way possible, for instance as seen below for the Peel rule.

For partitioning rules such selection will be based on closeness to the boundary:

Optional: specify level within the hierarchy to as closely as possible to match to the current geometry of the shape. For instance one before last Peel rule or first Grid rule (could use negative indices to count from the ‘front’ of history).

Grid rule auto-reindexing is straightforward except for question of what to do with 45 degree edge – it can belong to the lower or higher index or split between both, as seen below – in this case it is crucial that edge assignment is symmetrically consistent.

For Voronoi regions there is a little more ambiguity so one selection method has to be chosen.

In addition of edge set index based selection, rule can perform a custom selection on any part of the input shape boundary.

Select edges which orientation is within a given angle range, e.g. [85, 95] degrees are roughly perpendicular edges. 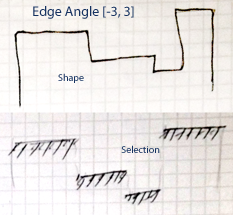 Select edges that lay within or partially within the radial region surrounded by two rays cast from the centre.

A number of directions are given. May result in inconsistent selection for non-convex shapes!

Based on W, N, E, S directions. Every polygon with |e| >= 4 should be capable of accepting a cardinal selection.

Such selection has already been discussed for Peel rule. However is it possible to create generic selection that all rules could adhere to?