The problem with selection arises when we have a non-quad shape in a rule production.

Indexing of regions, for instance in the context of the grid rule works well as long as we have [0-3] indexes for W(est), N, E, S directions.

Instead of one type of index based on orientation, or distance from the boundary, we need other types of indexing methods, for instance those that are semantically-aware.

It would be nice to have the following selection modes

During peel operation a and b are recorded by storing copies of the points. Another operations on the derived shapes can make selection based on these edges, for instance  for PEELED_INNER selector if an edge endpoints are in b, then it is selected.

Two options for such:

We are returning to enumerated indexing. 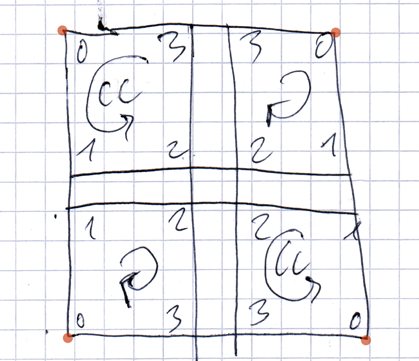 Indexing shall start at the iregion corners. The direction will be determined where the second index is.

Since iregion indexing starts at SW – the lower left corner, it shall be mirrored to the remaining elements (in 2×2 regions it is simple!).

Polygons are ALWAYS oriented one way, in our case clockwise. The indexing system allows us to avoid re-ordering vertices after each operation!