Looking at my current code I have decided to remove unnecessary abstraction – parasitic code. Only two structure are required:

Mutable structure I will call ParkState and immutable ParkModel (actually ParkModelSquare in case I shall have other parks).

I decided to start with the grid rule. It should be possible to apply it recursively.

Integer parameters of the rule changed their meaning. For instance 2×2 means 2 paths and 3 regions along each axis, NOT 2×2 regions as specified earlier.

It is trivial to implement 1×1 (that of 4 regions) subdivision:

However for 2×2 grid a hole is created after the operation 2. Hence we need to split the paths at the junctions.

The first implementation includes a function that iteratively splits into regions and then unites the two perpendicular sets of path regions. Each of the paths in each set are parallel to each other (NOTE details of the splitting are omitted but because they become irrelevant with introduction of the next section).

However in the next iteration two changes have occured:

In the light of the developments described above Grid now supports three types of regions:

These types also correspond to the nodes, edges and faces of the connectedness graph.

First of all the two sets of perpendicular path regions are stored into two multipolygons.

Centre regions are created by intersecting these multipolygons.

Park regions are created by subtracting the same union of path regions from the iregion.

Simple intersections of path regions can be replaced by more elaborate path centres. Centre is specified inside the third block statement with a shape rule and optionally a label.

We describe creation of a Rhombus centre. Rhombus shape operator/rule takes the form of “Rhombus(size1, size2)” where the sizes are the extensions of the shape along the x an y axes.

In fact the extension occurs along the parametrised by length path central segments. Think of the path regions created by extruding the path segments.

A System for Reordering of Indices

Boost subtract operation does not take into account ordering of indices. For instance subtracting a single path region from a quad input region (e.g. applying grid(1, 0)) will result in one of the subregions being of different index order.

We need to sync the indexes of the vertices of the input region to the resulting subregions. Edge indices directly depend  the vertex indices and will be correct provided vertex indices are fixed. Reindexing as follows

When Grid rule is applied recursively, Grid v2 paths will be corrupted. The following rules 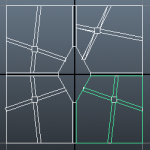 As can be seen from the south-west (lower left) region the third edge is selected from the centre instead of the ‘logical’ quadrant.

We fix this by adding this so called logical quadrant that is used for path construction, here in the second level of recursion. Logical quadrant consists of the region, which would have  been constructed without the centres. In this case we would not have the rhombus centre and there would be four squares after application of the first Grid.

Paths are now fixed in the second iteration as seen on the picture (v2.1)